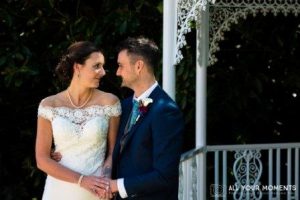 Emma and Craig Beckwith chose a Combined Ceremony because they wanted ‘what they wanted’ at their ceremony. A church ceremony was not for them and they were told about the scheme by Penderell Hall, their chosen venue.

The Combined Ceremony scheme seemed to offer everything they wanted. Most of all they wanted just one wedding day – for it all to happen at the same place at the same time. They looked at the celebrants involved in the Staffordshire scheme and chose Christine, who suited them perfectly. With Christine and the registrars, they had the outdoor ceremony that they wanted, and said it was perfect. Their guests thought it was great too!
Christine says, ‘I felt really honoured to conduct the first Combined ceremony as part of the Staffordshire pilot scheme. It was a glorious day made even more special for the bride and groom by being able to have the legal aspects of their marriage witnessed by family and friends, within a bespoke ceremony which included music, poems, a handfasting and the lighting of a unity candle. It truly was a wonderful occasion and one I hope is repeated many times in the years to come’.

Christine also commented on how well the ceremony worked with both celebrant and registrars working together. ‘Working closely with the registrars ensured that the flow of the ceremony was fluid, as we each took the lead for the different parts of the ceremony. Each section complimented the other.’ 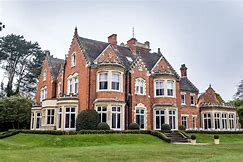 The ceremony also worked well for the venue, Pendrell Hall. Event Manager, Tamara says: ‘It was a great privilege for all the team at Pendrell Hall Country House Wedding Venue, to host the first ‘Combined Ceremony’ wedding in Staffordshire. We aim to fulfil every couples’ hopes and dreams for their wedding day and this new Combined Ceremony enabled Craig and Emma to incorporate the sentimental and personal features to the wedding ceremony, that they both wanted. It was a really beautiful and heartfelt wedding ceremony.’

Anne Barber, Managing Director of Civil Ceremonies Ltd, is delighted that not only has the first ceremony happened, there are more booked, and more interest being shown in the idea.

Do you have the following skills:

If you said ‘yes’ to all of the above then you have good basic skills.

If you have answered ‘no’ to any of the above then you will need to improve your basic skills before starting the course. This can be done in a few hours by using one or more of the free online tutorials available on the internet.